I’m a man and I have an eating disorder. That’s not a contradiction

I don’t remember the first time I purged. I remember it being a habit, a nightly ritual. I remember the pattern of the bathroom tiles in my parents’ house. White, diamond-shaped tiles, grout, the smell of toilet water – I spent a lot of time in there.

The anorexia and bulimia set in during my junior year of high school. But I didn’t have a name for it back then. Back then, it was the primal urge to be thin, to run as many miles as I could, to skip meals, to punish my body for eating.

It was my brain’s way of coping with the psychological trauma of growing up fat, a “never again” complex born of abuse, of being picked on and made to feel less than human. It was a mental illness. Though, again, I didn’t call it that. It stayed with me all the way up to my college years. 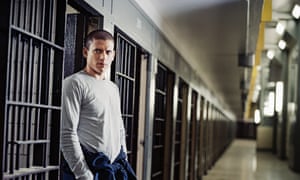 ‘It all came flooding back when I read Wentworth Miller’s post on being body-shamed by a meme making fun of his weight.’ Photograph: Mitch Jenkins/five

Today, I’m the heaviest (and happiest) I’ve been in a long time thanks to therapy and medication. When I think back to how drastic my condition was, it seems like a chapter from someone else’s life, like they’re someone else’s memories.

They all came flooding back when I read Wentworth Miller’s moving post on his depression and being body-shamed by a meme making fun of his weight.

“First and foremost, I was suicidal,” he wrote. “This is a subject I’ve since written about, spoken about, shared about. But at the time I suffered in silence. As many do.”

He recalled a time when he went hiking with a friend and the paparazzi snapped him. The pictures were published next to photos of him from his Prison Break days with headlines like “Hunk to Chunk” and “Fit to Flab”.

Miller wrote that when he saw the photos, it hurt to breathe. I can only imagine how I would have reacted at the height of my anorexia.

In high school, I wasn’t anorexic. I was “manorexic”. The joke was that I was a man suffering from a woman’s condition. In college I didn’t seek help because I didn’t want to admit that I had a problem. I was also closeted at the time, and I feared that telling anyone I had an eating disorder would “out” me.

I, like so many other men, was trapped. I felt compelled to maintain my masculinity, and that meant I couldn’t be weak. At the time, preserving this sense of masculinity took precedence over my own health.

But pretending that I was too strong to have a mental illness is not what saved me from my eating disorder. Forcing myself to adhere to the strict rules of masculinity, a system of belief that told me I couldn’t possibly be anorexic because I was a man, is not what saved me either.

What saved me was swallowing my pride and checking myself into therapy. What saved me was unpacking my preconceived notions on mental illness and taking a critical eye not to my body, but to the society that had conditioned me to hate it, to the messages I was being inundated with, and to the stigmas that had prevented me from seeking help in the first place. These practices are consistent with the values of feminism, and that’s why I continue to advocate that feminism holds benefits for men as well.

In opening up about his struggles with depression and with his body, Wentworth Miller set an example for men everywhere. He overcame the stigma. I know there are men everywhere who are suffering but too afraid to admit it. I was one of them. I’m sure Wentworth’s words helped countless people.